Democrats Back Away From Raising Tax Rates to Pay for Agenda

Responding to concerns from a key centrist, Senator Kyrsten Sinema of Arizona, the White House and leading Democrats are instead discussing a range of other taxes to pay for the plan. 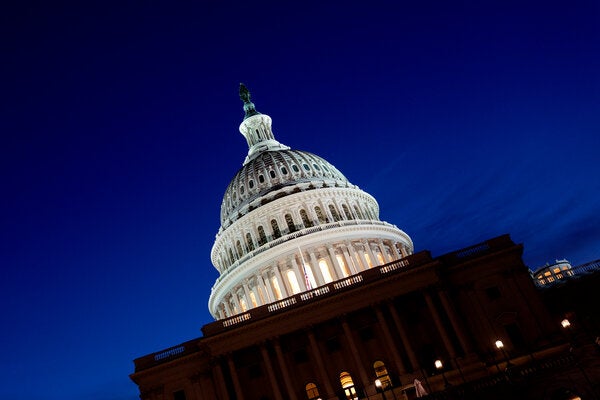 Among the options Democrats are exploring is a tax on billionaires’ wealth and on corporate stock buybacks. Credit... Stefani Reynolds for The New York Times

WASHINGTON — The Biden administration and congressional Democrats are moving toward dropping their push to raise corporate and individual income tax rates to pay for their sprawling domestic policy bill, instead drafting a plan that includes new ways to tax the wealthy and multinational corporations, according to people familiar with the discussions.

The conversations have been driven in large part by the concerns of a crucial centrist senator, Kyrsten Sinema of Arizona, who has been resisting any increase in either rate for more than a month.

While White House officials and leading Democrats had hoped to persuade Ms. Sinema to change her stance, their focus on different proposals for financing the package, which is expected to cost about $2 trillion, reflects a recognition that they need a backup plan if they want to secure the votes needed in the Senate to pass President Biden’s marquee legislative priority.

Officials have made no final decisions on the plan — which is expected to include education, child care, paid leave, anti-poverty and climate change programs — and negotiations are continuing, according to multiple people briefed on the effort.

Mr. Biden had proposed paying for those programs by raising the top individual income tax rate to 39.6 percent from 37 percent and the corporate rate to 28 percent from 21 percent. Administration officials have said privately in recent weeks that they believed Ms. Sinema would eventually support some level of increase in those rates. Her office declined to comment on continuing negotiations.

The plan the White House and leading congressional Democrats are discussing is built around a range of other revenue raisers to which Ms. Sinema appears to be open. They include increased I.R.S. efforts to collect taxes owed by corporations and high earners, and increased taxes on the income that multinational companies operating in the United States earn overseas, which many Democrats calculate could raise at least $1 trillion over a decade, combined.

Democrats are also exploring a tax on billionaires’ wealth and on corporate stock buybacks, which Senate Democrats have championed, along with a new minimum tax on corporations. Party leaders are also expected to count some potential revenue gains from increased economic activity generated by the bill, mirroring the “dynamic scoring” that Republicans claimed in 2017 as an offset for the tax cuts President Donald J. Trump signed into law.

Top Democrats also remain hopeful that some spending can be offset by an effort to reduce the costs the federal government pays for prescription drugs for older adults. Other revenue raisers appear to be off the table entirely, including a tax on carbon emissions that environmentalists had hoped to include, because of opposition from some lawmakers.

Administration officials say they have a large menu of options to pay for the spending and tax cuts in their bill, which is being pared back from the $3.5 trillion plan included in Democrats’ budget blueprint, largely to satisfy Ms. Sinema and a fellow holdout Democrat, Senator Joe Manchin III of West Virginia, both of whom have balked at the cost.

In order to maneuver around unanimous Republican opposition, Democrats are moving the bill using a fast-track budget process known as reconciliation that shields fiscal legislation from a filibuster. But to cobble together a majority for passage with their razor-thin majorities, they must keep all 50 of their senators and nearly every House Democrat united behind a final product. That gives Ms. Sinema and Mr. Manchin something close to veto power over the contents of the bill, which cannot pass without their backing.

Sign Up for On Politics   A guide to the political news cycle, cutting through the spin and delivering clarity from the chaos.

Mr. Biden has repeatedly called for his plan to be funded largely by taxes on high earners and corporations, and he has vowed not to raise taxes on anyone earning less than $400,000 a year. But he has also expressed flexibility, in public and in private, on the overall shape of the package.

“What we think about here is what we want to achieve,” Jen Psaki, the White House press secretary, told reporters this week, “which is historic impact on how we address child care and care issues that families across the country are having, making sure we’re doing something to address the climate crisis, and making sure we’re more competitive and putting people back to work. There are a lot of ways to get there.”

Senator Ron Wyden of Oregon, the Finance Committee chairman, and other top Democrats have rolled out a steady stream of tax proposals over the last few months, with the goal of having sufficient options to provide however much revenue is needed to finance the reconciliation bill.

Where the Budget Bill Stands in Congress

A framework has yet to emerge. No final decisions have been made on the plan — which is expected to include education, child care, paid leave, anti-poverty and climate change programs — and negotiations are continuing. But even with a scaled-back version, passage of the bill is no guarantee.

Mr. Manchin has pushed back against the high levels of spending Democrats are proposing, but he has been openly supportive of rolling back the tax cuts Republicans passed in 2017 during the Trump administration. As a member of the House in 2017, Ms. Sinema joined every Democrat in voting against the Republican tax plan that lowered those rates, but has remained resistant to increasing the corporate and individual income tax rates.

Ms. Sinema has been engaged in regular talks with Mr. Biden and senior White House officials, including a meeting in her private basement hideaway in the Capitol on Wednesday, as administration officials push for her to accept even a small increase in the rate.

Democratic leaders met privately on Wednesday with the leaders of the tax-writing committees, Mr. Wyden and Representative Richard E. Neal of Massachusetts, as well as White House staff members as they raced to cobble together a compromise outline by the end of the week. In private meetings with rank-and-file lawmakers on Tuesday, Mr. Biden largely steered clear of discussing details about the revenue side of the bill, signaling the hurdles still ahead.

White House officials insisted on Wednesday that they continued to consider all proposals for financing the package.

“The president is working to pass game-changing investments in economic growth that benefits the middle class, paid for by having the richest taxpayers and big corporations pay their fair share and without raising taxes on any American making less than $400,000,” said Andrew Bates, a deputy press secretary. “The price tag for this legislation is 0. There is an expansive menu of options for how to finance the president’s plan to ensure our economy delivers for hardworking families, and none of them are off the table.”