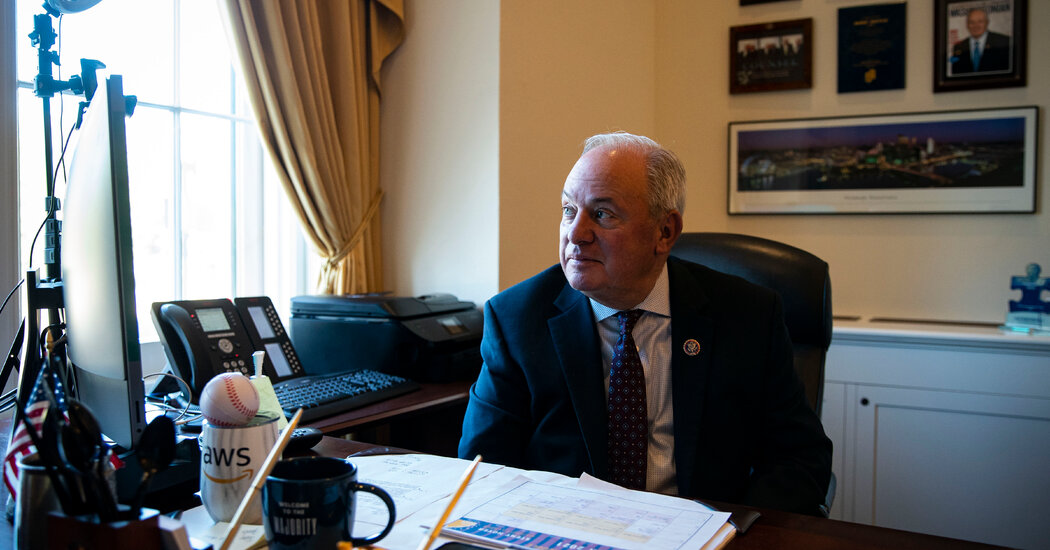 As they survey a grim political landscape for their party, three senior House Democrats opt for retirement and lament the factionalism within their ranks. 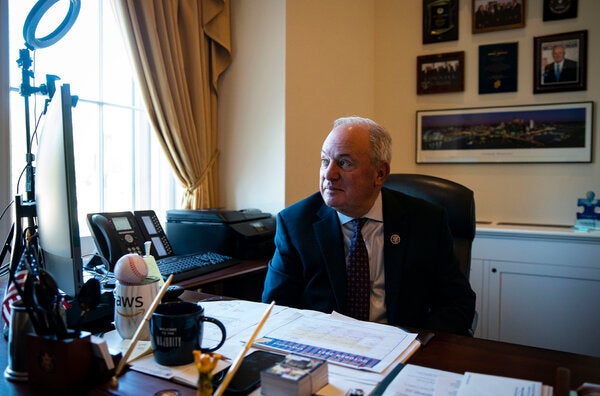 WASHINGTON — The quickening pace of Democratic retirements in the House may be the clearest indication yet that the party’s hopes of maintaining its narrow majority are fading amid President Biden’s sagging approval ratings, ongoing legislative struggles and the prospect of redrawn congressional districts that will put some seats out of reach.

In recent days, Representatives John Yarmuth of Kentucky, David E. Price of North Carolina and Mike Doyle of Pennsylvania have announced they will not seek re-election. In all, a dozen House Democrats have said they will retire or seek other offices next year, including powerful lawmakers like Mr. Yarmuth, the chairman of the Budget Committee, and members from the most politically competitive districts, such as Representatives Ron Kind of Wisconsin and Ann Kirkpatrick of Arizona.

In interviews, the three representatives who most recently announced their retirement said personal issues were paramount in their decisions — they have served 72 years in the House between them. But they also cited three political factors: redistricting ahead of the 2022 elections, Donald J. Trump’s continued power over Republicans, and the rising Balkanization of the Democratic Party, that they said had made governance increasingly difficult and frustrating.

None of the three expressed concern about any particular bloc in their fractious party, which includes a growing progressive wing, an ardent group of moderates and the pro-business “New Democrats.” Rather, they said they were worried that none of the groups was willing to compromise, leaving two vital pieces of President Biden’s agenda — a trillion-dollar infrastructure bill and an ambitious social policy and climate change measure — in limbo.

“That’s the danger I see for our party, these absolute positions emerging,” Mr. Doyle said. “It used to be you fought those fights in caucus, but when the caucus made a majority opinion, you moved forward.”

“I have a concern that we will have the ability to pull ourselves together, and not fracture among the caucuses the way the Republicans have,” he said.

Democrats face an uphill battle to retain control of Congress. They cannot afford to lose a single seat in the Senate, but they do not face gerrymandered maps there, and vulnerable Republican seats in Pennsylvania, Wisconsin, North Carolina, and Ohio make Democratic gains possible.

In the House, Democrats can afford to lose only three or four seats. The party holding the White House almost always loses seats in midterm elections, and with President Biden’s approval rating well under 50 percent, the historical headwinds look strong. While 10 Republicans have said they will not seek re-election, the G.O.P. sees the recent retirement announcements of prominent and long-serving Democrats as an acknowledgment of defeat. 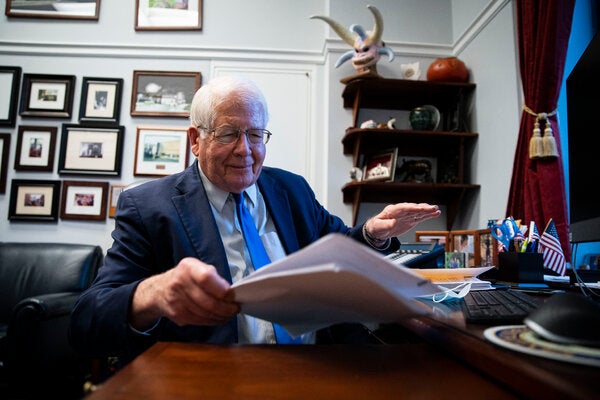 “These Democrats spent decades accumulating power and seniority in Congress. They wouldn’t give up that power if they felt Democrats were going to hold the majority,” Mike Berg, a spokesman for the National Republican Congressional Committee, said.

Democrats insist that unique factors will make the 2022 elections history defying. Mr. Trump, the Capitol attack of Jan. 6, the pandemic and the fate of democracy itself will share the ballot with the usual issues of economic growth and the performance of the president.

“While voters see Democrats rebooting the economy and getting folks back on the job, Republicans are campaigning on junk science that is endangering people’s lives and false election claims that threaten our democracy,” said Chris Taylor, a spokesman for the Democratic Congressional Campaign Committee.

Redistricting will make the Democratic road steeper. David Wasserman, who tracks new district maps for the nonpartisan Cook Political Report, said so far, Democratic fears look somewhat overblown — Republican state legislatures have already gerrymandered their maps so severely that they can only go so much further. Republicans appear more intent on shoring up their vulnerable incumbents than destroying Democratic seats, he said.

Sign Up for On Politics   A guide to the political news cycle, cutting through the spin and delivering clarity from the chaos.

In contrast, Democratic legislatures, especially in New York and Illinois, may actually produce more partisan maps than their G.O.P. brethren. In all, Mr. Wasserman said, Republicans could net up to five seats from new district lines, possibly enough to win the majority but far fewer than the 10 to 15 seats some Democrats fear.

Nonetheless, the new maps are pushing Democrats toward retirement. Mr. Doyle said he expects his district, which was once dominated by the city of Pittsburgh, to expand into more Trump-friendly counties to allow some of his Democratic voters to shore up the swing district now held by Representative Conor Lamb, a Democrat who is running for the state’s open Senate seat.

He could still win, he said, but he would have a whole new set of constituents, staff to hire, offices to open and hands to shake. After 26 years in the House, retirement was logical.

Republicans toyed with breaking Mr. Yarmuth’s Louisville district into three Republican parts, but that idea is meeting resistance, even from the Senate Republican leader, Mitch McConnell of Kentucky. 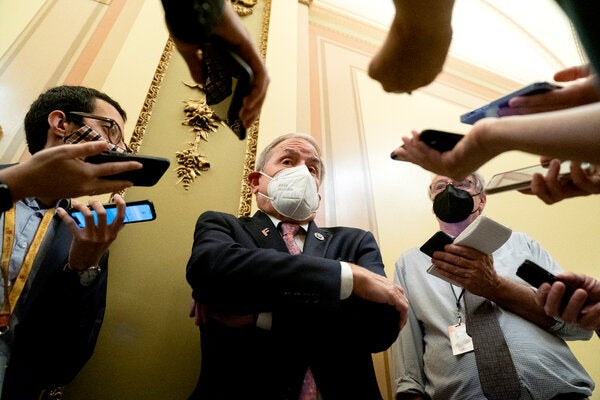 John Yarmuth of Kentucky warned his Democratic colleagues that failure to pass the infrastructure bill and social policy measure would be politically disastrous. Credit... Stefani Reynolds for The New York Times

But as those maps become more partisan, the prospect of polarization grows, Mr. Price said. Mr. Doyle’s retirement opened the door for a considerably more liberal Democrat, Summer Lee, to jump into the race on Tuesday, with the backing of Justice Democrats, which has pushed the Democratic Party to the left. An even more Democratic district in the Research Triangle could elect a Democrat to the left of Mr. Price.

As for the right, Mr. Price said, the attack on the Capitol on Jan. 6 “has scarred the House and raised serious questions that I never thought would be raised, about the future of the rule of law, the acceptance of election results, the peaceful transfer of power and the very future of democracy.”

With far-right Republicans such as Representatives Madison Cawthorn of North Carolina and Marjorie Taylor Greene of Georgia already calling for Mr. Biden’s impeachment, Mr. Yarmuth said, “the prospect of serving in the minority is horrifying.”

Still, Mr. Yarmuth reserved some of his harshest words for newcomers in his own party. Older members who helped draft the Affordable Care Act; the Dodd-Frank banking regulations in the wake of the 2008 financial crisis; and even President Barack Obama’s climate change bill, although it ultimately failed in the Senate, knew how to compromise, he said.

“The people in the House who have been drawing all the lines are people who have not served in a governing majority,” he said. “They all have come since 2010.”

And all of the newly announced retirees warned their colleagues that failure to pass the infrastructure bill and social policy “reconciliation” measure would be politically disastrous for the Democrats.

“We’re not having trouble getting reconciliation done because of Republicans; it’s because of ourselves,” Mr. Doyle said. “While people say they don’t like to watch sausage made, they like to eat the sausage in the end.”