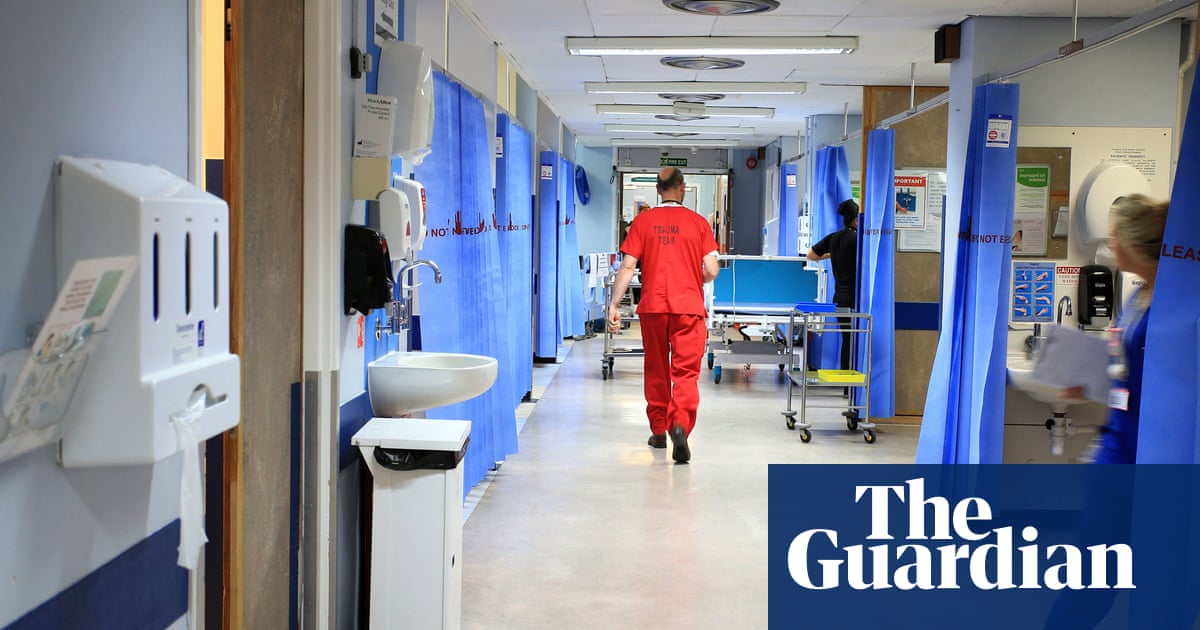 Morning everyone. I’m Martin Farrer and these are the top stories today.

NHS staff across the UK are facing a “growing tide of abuse”, including assaults from patients, which they say is being caused by frustration at long waits for care. Six medical bodies and staff groups have written a letter to ministers in which they blame patients’ increasingly long delays in receiving treatment on years of successive governments underinvesting in the NHS and not fixing severe workforce shortages. They are urging ministers to be “honest and transparent” about the intense strain on the NHS after a rise in threats and assaults on frontline staff. It comes amid a growing belief that ministers’ verbal attacks on GPs and “failing” hospitals are part of a strategy to blame the NHS for its many problems. One senior medical leader told the Guardian there was a “noticeable change in the political rhetoric away from thanking and supporting the NHS to demanding that it now delivers the recovery of services”. Separately, Dr Katherine Henderson, a senior AE consultant in London, explains the struggle of having to deal with “very angry” patients.

Flight ban urged – Domestic flights should be banned and long-distance train fares subsidised if an equivalent train journey takes less than five hours. The Campaign for Better Transport has also called on ministers to resist calls for any cut in air passenger duty, and urged the introduction of mandatory emissions labels on tickets and a frequent flyer levy. The demands come as Rishi Sunak is under pressure to cut taxes on domestic flights, but such a move in his 27 October budget could prove an embarrassment a week before the UK hosts the Cop26 climate conference in Glasgow. And leading business executives have warned political leaders they must do more to prevent the destruction of nature as they gear up before a summit on biodiversity in China next year.

Aid ‘saving’ – Sunak is to save billions of pounds by counting as aid financial assistance to poor countries being provided as a result of a windfall Britain has received from the International Monetary Fund. Britain received $27.4bn (£20bn) as its share of an allocation of IMF special drawing rights (SDRs) – financial assets designed to help poor countries struggling during the pandemic – months after the government decided to cut aid spending from 0.7% to 0.5% of national income. The move was criticised by former Conservative development secretaries.

Giuffre investigation dropped – The Metropolitan police are taking no further action after a review prompted by Virginia Giuffre, who is taking legal action against Prince Andrew. Met officers made the decision to drop their investigation after reviewing several documents, including one relating to an ongoing US civil lawsuit concerning Giuffre, who alleges she was forced to have sex with the prince when she was 17 years old. The 61-year-old royal denies the allegations.

Coronavirus – One in six patients requiring the NHS’s highest form of life-saving care are unvaccinated pregnant women with Covid, new figures reveal. Health chiefs hope releasing the data will persuade more pregnant women to get fully vaccinated. However, anti-vax sentiment was highlighted after the home of BBC presenter Jeremy Vine was targeted by anti-vaccine activists in protest at reporting on vaccines. In Australia, people in New South Wales are enjoying renewed freedoms such as going to the pub today after the state’s 107-day lockdown was eased.

Lego rebuild – Lego has announced it will work to remove gender stereotypes from its toys after the company found attitudes to play and future careers remain unequal and restrictive. Researchers found that while girls were becoming more confident and keen to engage in a wide range of activities, the same was not true of boys. Of the boys surveyed, 71% feared they would be made fun of if they played with what they described as “girls’ toys” – a fear shared by their parents. Parents still encouraged sons to do sports or Stem activities, while daughters were offered dance, dressing up or baking.

Three weeks from today, leaders will gather in Glasgow for the Cop26 climate summit. George Monbiot explains that while his expectations are low, the only way the planet can avert catastrophe is to agree to radical and far-reaching changes to our way of life.

After a decades-long slump following his turn in Ferris Bueller’s Day Off, Alan Ruck’s career has come roaring back with the role of Connor Roy in Succession. He tells Hadley Freeman about his 80s success, his “attitude problems” and his excitement about the new series of the family saga.

Ben Stokes has been told to pick up the phone when he feels ready to return after Chris Silverwood, the England head coach, named his strongest available Ashes squad without any players pulling out due to travel concerns. In a race that could not have been a more straightforward pole-to-flag win for his teammate Valtteri Bottas, Lewis Hamilton was left angry and frustrated with his Mercedes team as vital world championship points slipped from his grasp at the Turkish Grand Prix. Andy Murray showed he is not ready to surrender to his sport’s next generation after battling past Carlos Alcaraz in the second round of the BNP Paribas Masters in Indian Wells. Katie McCabe delivered another stunning performance to help Arsenal extend their perfect Women’s Super League start with a 3-0 win over Everton while France won the Nations League final in Milan after Kylian Mbappé scored the decisive goal in their 2-1 win over Spain. Tyson Fury’s tears of relief after Saturday night’s heart-pounding win over Deontay Wilder showed just far he had been pushed, writes Donald McRae. And the Atlanta quarterback Matt Ryan completed 5,000 career regular season passes as he guided the Falcons to a 27-20 win over New York Jets in London.

The Treasury has reprimanded Kwasi Kwarteng after he suggested he was consulting Rishi Sunak about support for firms struggling with soaring energy prices. Treasury sources denied the department had yet received any proposals or even had discussions about support for ailing essential industries, despite claims made by the business secretary to broadcasters on Sunday morning. The FTSE100 is set to dip slightly this morning while the pound is on $1.365 and €1.179.

The Guardian leads with “NHS waiting lists trigger ‘tide of abuse’ against staff”, and there’s also a health splash in the Mail – “Just a single GP for every 2000 patients”. The Times goes with the energy crisis – “Ministers clash over help for factories” – and so does the Telegraph with “Treasury slaps down ⁦Kwarteng ⁩ in energy row”, and the i with “Gas price clash over bailout for factories”.

The Express has “Stark warning: get used to higher food bills” and the Mirror leads on news of Boris Johnson’s holiday in Marbella: “Only here for the peer”. The Sun celebrates Tyson Fury’s heavyweight boxing win with “Ty am the greatest”. The Scotsman reports “Shock over number of sex complaints against police” and the Record has “Anti vaxxers ambush OAPs”.

The Guardian Morning Briefing is delivered to thousands of inboxes bright and early every weekday. If you are not already receiving it by email, you can sign up here.

Sign up to Inside Saturday to get an exclusive behind the scenes look at the top features from our new magazine delivered to your inbox every weekend.